At the start of this year, the health food company Good4U asked me to style and photograph their dishes. It was during this photo shoot that I had my “light bulb moment”. I knew straight away that this was the type of photography project for me. Getting to taste a wide variety of flavours and learning about different ways to prepare and cook food got me very excited. At the time I was struggling to figure out what photography route I wanted to take and I feel this Good4U shoot was a major blessing that became the beginning of a very exciting journey.

I am starting this blog to share all things “foodie”. This will include the people and foods I come cross along the way, the recipes I have been putting together the last while and of course tips on food styling and photography. 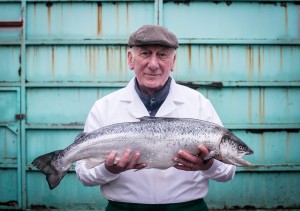 Last week Hanlon Smokehouse got in touch. After our first meeting I was bursting with enthusiasm. The reason being that smoked salmon is an all time favourite of mine and the Hanlon family business has a long and interesting history. Hanlon Smokehouse is Ireland’s oldest family run salmon smokehouse and their passion for this craft is incredible.   On meeting with the Hanlon’s they explained how two brothers Paddy and Michael Hanlon established the company in Howth in 1845. They soon relocated the business to Moore Street. They did this to be at the very heart of Dublin’s capital and one of the great food trading centres in the city.

The brothers had the ambition to make their passion for fish a success and identified the Pale as a potential market. Fiona Hanlon explained how this gamble paid off and they became known across Dublin as top quality fishmongers. The Hanlon’s success was further highlighted in 1890 when they became the official suppliers to the Lord Viceroy in the Phoenix Park and eventually were granted an official licence by Queen Victoria to be her favoured supplier in Dublin.

As their business grew, so too did the reputation of Paddy and Michael Hanlon and they are referenced in James Joyce’s world famous “Ulysees” which was set in 1904, “Still it’s the same fish perhaps old Mickey Hanlon old Moore Street” . During the 1916 rising when the rebels broke out from the GPO they made their way down Moore street gradually reaching the Hanlon fish shop where they laid out their wounded on the filleting blocks and negotiated the final surrender with the British army. Hanlons grew to become a household name in Ireland through the 1950’s – 1980’s.

Five generations later, Hanlon’s Smokehouse remains faithful to the original recipe and method. The salmon is lightly salted on each side for 5 hours, after which any excess salt is washed off before smoking.The Hanlon’s carefully blend the flavor of the wood, the right quantity of smoke for the exact amount of time to produce their signature smoked salmon.

The Hanlon’s have fantastic characters as part of their team. One in particular being Michael Reynolds, has been smoking fish with the Hanlon’s for 50 years . He has a true love for this craft and treats it very seriously. He truly lived up to his character when he stated the following:   “I came in here fifty years ago a young clueless boy and I will be leaving here a happy old man”.

I spent two days photographing the process of preparing and smoking the salmon. I also took photographs of the various smoked and barbecued salmon products, which will be available to buy on line for Christmas.   The rich flavours in this product are to die for and will most definitely will be on my menu this Christmas day.